Trump and Putin Met in Finland, ‘A Good Start ?’


Most common people in the world are probably happy about Putin and Trump meeting in Helsinki. The meeting started with delightful secrecy; Trump winking his eye, which made Putin smiling, while both pretending to be solemn and serious in front of public and reporters. I think any meeting with world leaders whether inimical or friendly should be appreciated by the folks.

Some leftists were demonstrating in the streets of Helsinki and I think made themselves a bit fools, as they do recommend usually discussion instead of waging war, but this time they protested while Trump and Putin were discussing i.e about how to help Syria, so that the refugees can go back home.

Better now Putin and Trump to really keep their words and start funding to settle Syrians back to home. That would be the real solution; less refugees in EU to struggle with, as many countries are unable to integrate them well on society. In this sense the right wing Finland First – movement was more sensible having demonstration on behalf of Trump, although usually they are more the cause for atrocities in Finland. 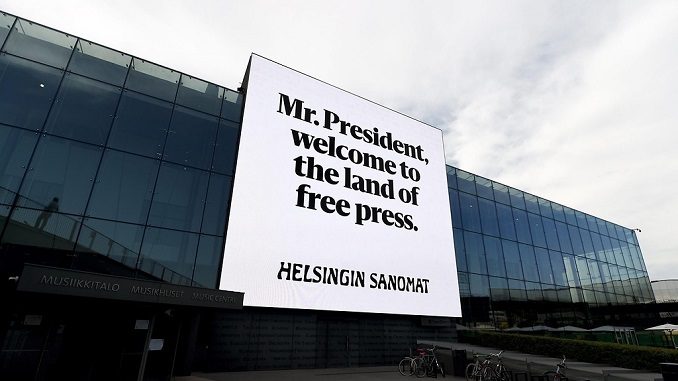 The questions presented in the press conference were mostly from the US main stream media reporters who concentrated on Russian meddling on election of Trump, which made the both leaders to have even some fun with. Besides Putin brought up a new allegation of Russians doing 400 million business without paying taxes and funding with the money Clinton campaign.


Finnish part in the meetings; When the meeting was announced with only a few weeks to prepare, officials cancelled or postponed their typical July holidays on a voluntary basis. The city police called in reinforcements from across the country to meet their need of up to 2,000 officers on duty. https://www.politico.eu/article/donald-trump-vladimir-putin-helsinki-summit/

Since World War II, Finland has remained militarily neutral, between Moscow and West. According Finnish president Niinisto; ‘Helsinki has figured out how to stand up to Russia without provoking Putin’s wrath’. Lavrov and Soini discussed building nuclear power plants together, and managing the flow of refugees across their shared border in the past. President Putin has praised Finland’s security policy. Finland has also built friendly relations with NATO, largest drill, while majority of Finns remain opposed to joining NATO, https://foreignpolicy.com/2016/03/07/how-finland-became-europes-bear-whisperer-russia-putin/

Finnish Scientist Foreign Affairs, Teija Tiilikainen, ‘This meeting is extremely meaningful, because global political situation is in the crossroads. President Niinisto is having good relationship with Putin and Trump although matters conflict.’ Other scientist Salonius-Pasternak, ‘Finnish army and police is able to upkeep good security. There has not been any leaks about previous meetings’, https://www.hs.fi/ulkomaat/art-2000005736254.html

President Niinisto; ‘According EU-wide poll 75 % of Finns want to defend their country militarily, compared with 18 % in Germany,’ Mr Niinisto adds; ‘EU needs a common refugee policy with tighter border controls’. And about Mr Putin. ‘He doesn’t forget his friends, if he has been dealt with respectfully,’ https://www.ft.com/content/0754c814-657d-11e8-a39d-4df188287fff.

Finnish EU chairmanship, presidency, will start on 1.7. 2019, just after new commission of EU starts. This gives unique possibility for the new EU president for directing working methods of the council. https://suomenkuvalehti.fi/jutut/kotimaa/mielipide-kotimaa/eu-puheenjohtajakausi-on-suomelle-mahdollisuus-jota-ei-pida-jattaa-kayttamatta/

Benjamin Fulford July 2nd 2018; The revolution continues as old regime collapses in EU. Finnish person will be the next chair in EU, so Finland is going to be used on changing the EU policies discussed by Putin and Trump summit in Finland. More from Fulford, https://www.youtube.com/watch?v=fGT5eyenWsQ

Finnish Body language analyser; Trump showed up more active, and Putin was acting like impassive by being late. Handshakes didn’t show power struggle. Trump defended himself by bringing up old matters about Clinton, Putin attacked press and taking care of having equal rights. The meeting went well and was productive. https://www.iltalehti.fi/kotimaa/201807162201078459_u0.shtml

Body Language Prove Trump is being truthful about election, https://www.youtube.com/watch?v=QMJAkw6RZU8

John Brennan, US leftist politician, tweets like demonstrators; Donald Trump’s press conference performance in Helsinki rises to & exceeds the threshold of “high crimes & misdemeanors”. It was nothing short of treasonous. ‘Not only were Trump’s comments imbecilic, he is wholly in the pocket of Putin’. Anderson Cooper, MSM, ‘the most “disgraceful performances by an American president” ever’.

Russian media has praised Trump, and give impression that Russia is going to sit more in international negotiations with USA in the future. The influence of Russia will practically increase. Putin are said to have offered for Trump co-operation in many global problems, which Trump has shown interest in. The cracking rows of Trump somewhat confirms that the summit was total success for Russia, https://www.satakunnankansa.fi/…Another historic event, similar to meeting of Kim and Trump, http://tass.com/world/1011498

Psychic Focus about heat wave and EU situation; there is an underlying agenda to destabilize Europe by cabal. It first started with the migrant crisis. PTW (The Powers that were) make it worse by radical weather manipulation, which ultimately will hurt the EU economy. They cannot control Trump, but they can lay the framework for regaining control of the US again (to get leftist government). They will “buy Europe for pennies on the dollar”… (Please give good vibes to EU), http://psychicfocus.blogspot.com/2018/07/drought-in-uk-and-floods-in-italy-and.html

This year May already had record-high temperatures, in Germany, Poland and the Lapland, EU’s Nordic region. https://www.apnews.com/73e175d72efc4cf8a3e66eec85831aeb

16 June 2018, In 92 percent of Polish municipalities tell, spring cereals are in danger. Since May there has been hot, but no rain. Disaster and emergency planning going on, https://polandinenglish.info/37717188/dry-summer-spells-disaster-for-polands-crops

Now, at least in Poland, has been already raining few days constantly, but I guess too late for some crops. DA


A lot of analyses from body language experts. Some of them seem to have their own agenda, but most seems to be for real. Commonly seems Putin and Trump had a productive meeting, much of it was of course secret, but we will see some results in the near future. Both seem to have good intention.

What comes to politics, I would prefer Yogis to Run the World

Didi Annapurna, you may post if you link it here, thanks
Trump Attends Meetings about SSP and ETs - on spac...
Would Non-Violence Solve the Problems of Today?
Father Frost Happy with Russian President Putin?
Church Bells Ringing all Over the World for Aleppo and to Prevent Nuclear War
Finland has the Best Schools – why is that?
Predictions about the Bright Future of Humanity