Lemuria between Australia and India. Kumari Nadu is the name of a legendary sunken continent mentioned in early Tamil and Sanskrit literatures. Tamil nationalists identify Kumari Kandam with Lemuria. Manimekhalai mentions tsunamis swallowing the ancient city of Poompuhar, supported by finds of submerged ruins off the coast of modern Poompuhar. Ernst Haeckel theorized that the humans originated in a land now submerged in the Indian Ocean. Maclean in 1885 added that it was the homeland of the proto-Dravidians, much more, http://en.wikipedia.org/wiki/Kumari_Kandam. 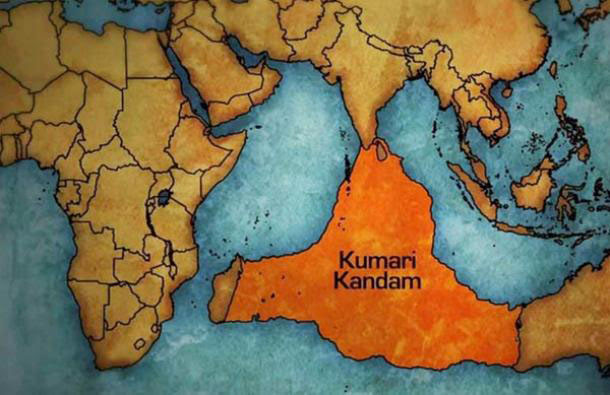 The ancient legend of Bagobos of Philippines claim that Cibolan River of Apo Sandawa was the cradle of Human civilization. The area possibly hosted survivors of Lemuria. "Cibolan" is Dravidian/Pilipino language meaning "golden city of red" (rahr means "land of red soil", DA). The link of fossil evidence of first humans in Africa and Asia may be traced back to the Continental Drift 200 Million years ago. http://www.dailymail.co.uk/sciencetech/article-2154753/Myanmar-fossil-turns-human-history-head--earliest-ancestors-came-Asia-Africa.html. Source, http://maharlikhan.blogspot.com.

The Hindus have many scriptures where civilization first originated. One such lost empire Lanka is described in the Ramayana. Dravidian vast sunken land was known as "Rutas" in south-east India. The Dravidians moved to India before Rutas sunk. http://www.burlingtonnews.net/leumurian3.html

The Cayce readings refer to a lost continent in the Pacific as Lemuria, Mu, Zu, and Oz. The Mu people went underground (shambala) before flooding to keep the records of Earth.The legends of Mu area are identical with the zoologist’s land of the lemurs (half apes).


The Law of One mentions Lemuria fell due to selfish motives. The Maoris of New Zealand talk about their arrival from a sinking island. Where did Lemurian full-blown culture come from, did ETs introduce a new species, or were humans coming from higher frequency? According excavators of Harappa, Heras and Marshall, the Southern Dravidian civilization was highly developed, and moved to Harappa and Dwarka area (possibly after Lemuria sank, DA).

Lemuria between India and Australia? According some rumors Indian P. R Sarkar has told that there was a sunken land mass connecting India to Australia, but those people (Austrics, Dravidians?) living there were not that developed what people believe nowadays the Lemurians to be.