This article was originally posted on http://beforeitsnews.com/spirit/2016/05/jesus-and-israel-never-die-2502435.html

There are more and more psychics coming up and having constant flow of real or fancy messages from Jesus. He did not die on the cross, according not only the Western psychics and remote viewers, but equally the Indian researchers and yogis. It is also quite common belief that Jesus travelled and stayed in India between the age of 13-30. The biggest difference of opinion seems to be – where he spend the last part of his life after his crucifixion.

Let’s see first what the Indian yogis have to say about Jesus. I have heard myself from Acarya Savitananda about his experiences in Srinagar, where he was working as a missionary in seventies; ‘Many local people believed in Srinagar area that Jesus stayed once in Himalayas, in Kashmir valley. He did Shiva´s meditation there. Shiva became like a Guru to Jesus. The people used to call Jesus as Baba (Indian term for gurus). When he returned to Palestine (Roman empire), he didn’t tell anything about his visit to India and his meditation practices’.

Ac Savitananda’s own Guru Shrii Shrii Anandamurti told in eighties about Jesus; Once a yoga monk from India came near Mary’s (mother of Jesus) home. Mary fell in love to him and she became pregnant. The Guru of that yoga monk ordered him mentally back to Himalayas, as the monk had done a mistake by getting engaged with a woman. Mary got married with another man Josef, and they got the child – Jesus.

When Jesus was 13 years old, he went to visit his father to Himalayas and stayed there studying meditation practices. Later when he came back and there was a plan to crucify him, he asked mentally his Guru what to do. His guru said: ‘just use your powers and let them crucify you, but get out of your body before, and take a new body’. Jesus asked: ‘what about the blood which suppose to come out?’ His Guru answered: ‘you know how to do that, use your powers’. So Jesus did accordingly, and didn’t actually die on the cross.

Shrii Srii Anandamurti visited Israel in eighties and mentioned there; ‘Concept of special Madhu sadhana (nightly meditation) originated here during time of Solomon. They were Sufis. One of the main Shaeva Tantra centers was here. God doesn’t want this country, Israel, to ever die’. (Obviously due to faith and inspiration that Jesus left behind in the hearts of Israelis, DA). Jesus was referred to Isa in old Arabic’.

Jesus had many names; The Koran, refers to Christ as “Issar”. In his travels through Persia (Iran), Christ became known as Yuz Asaf. Kashmiri historical document confirms that Isa was in fact also known as Yuz Asaf. Issa’s travels and death in Kashmir; http://www.sol.com.au/kor/7_01.htm. Tibetan Gospel; http://www.essene.com/Issa.htm. And http://reluctant-messenger.com/issa.htm

Akiane Kramarick on The Katie Couric Show; Spiritual painter, Akiane’s painting of Jesus, made at the age of eight; https://www.youtube.com/watch?v=o6HLg2XUFOg 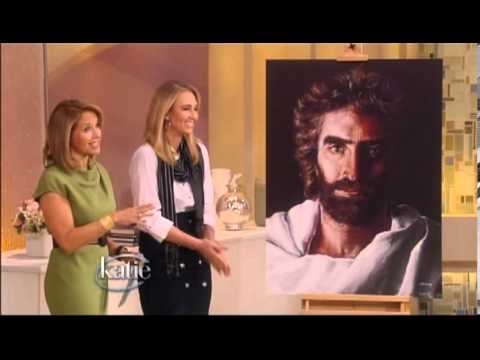 In 1894 Nicolas Notovitch a Russian doctor was touring India and stayed awhile at the Himis’ convent in Leh, Ladakh. He learned, that there existed ancient records of the life of Jesus Christ. He noted down got translated over two hundred verses from the document of ‘the life of saint Issa’. Book The Unknown Life of Jesus Christ. http://www.sacred-texts.com/chr/uljc/uljc06.htm

Swami Abhedananda went to the Himalayas to find proof. His book entitled Kashmir O Tibetti, includes a Bengali translation of essentially the same texts as the Notovitch got. In 1925, another Russian Nicholas Roerich, a philosopher and scientist, saw the same documents. Swami Trigunatitananda traveled to Ladakh and verified the existence of ancient Buddhist texts recording the life of Jesus. He was also shown two paintings of Jesus by the Buddhist monks, and made a copy of one when he was living in America.

In 1921 the Himis was visited by Henrietta Merrick who, in her book In the World’s Attic wrote: “In Leh is the legend of Jesus who is called Issa, the Monastery at Himis holds precious documents fifteen hundred years old.” In 1939 Elisabeth Caspari visited the Himis. The Abbot showed her some scrolls to examine, saying; “These books say your Jesus was here.” In the late 70s Edward Noack and in 1975 professor Robert Ravicz were told in Himis monastery, that there are manuscripts which describe the journey of Jesus to the East.

The Natha monks read with Bengali educator, Bipin Chandra Pal about Isha Natha, one of the great Natha teachers, from their sacred books, the Nathanamavali; ‘Isha Natha came to India at the age of fourteen. Later he returned to his own country. After crucifixion he entered yogic samadhi. Jews presumed he was dead, and buried him in a tomb. Chetan Natha in the Himalayas saw in a vision what Isha was undergoing. Chetan went to Isha’s tomb in his light body, woke him from samadhi and later took him to the sacred land of the Aryans’.

Kashmiri history book, the Bhavishya Maha Purana 3.2.9-31; When the king of the Sakas came to the Himalayas, he saw a person of golden complexion wearing a long white robe. Astonished to see a foreigner, he asked, ‘Who are you?’ The dignified person replied in a pleasant manner: ‘Know me as Son of God [Isha Putram]‘.

In the twentieth century the Shankaracharya of Puri wrote a book to prove Jesus lived in the Govardhan Math, in Puri. Swami Sri Yukteswar Giri wrote a study in which he proved teachings of Jesus were identical with the Indian Sanatana Dharma. Swamis Brahmananda, Rama Tirtha and Ramdas saw Jesus in visions. Sri Ramakrishna kept a picture of Jesus in his room, being disciple of Jesus.

Swami Sivananda of Divine Life Society in Rishikesh, not only wrote about life of Jesus, but in the daily evening kirtan led all in singing: “O my Jesus, O my Jesus, Lord Jesus, Come, come to me…! And ‘Jesus Bhagavan: ki jai!’ (Long live Jesus!) Western Vedanta Society members; Swami Akhilananda wrote about Jesus in Hindu View of Christ and Swami Prabhavananda in The Sermon on the Mount According to Vedanta. Pope of Rome wrote a letter to the South Indian Ishannis, “the Nazarani Christians” in the fourteenth century. These experts were from http://ocoy.org/original-christianity/the-christ-of-india/.                      …………………………………………..

Swami Yogananda; ‘Intuitionally perceived spiritual interpretation of the words spoken by Jesus reveal the perfect unity that exists among the revelations of the Christian Bible and the Bhagavad Gita of India… The Book title The Second Coming of Christ, means; Consciousness, experienced in the ever new joy of meditation, will be the real second coming of Christ.

We must know Jesus as an Oriental Christ, a supreme yogi who manifested full mastery of the universal science of God-union, and thus could act as a savior with the voice and authority of God. He has been Westernized too much. We understand resurrection as yoga science that clearly defines the underlying principles by which Jesus resurrected his crucified body into the freedom and light of God’. http://www.yogananda-srf.org/Hidden_Truths/The_Hidden_Truths_in_the_Gospels.aspx#.V0dBkOQhnIU. OSHO: Jesus Never Died on the Cross; https://www.youtube.com/watch?v=rVP3Jsp8CE8.

And more from Government of India video


BBC has made also Documentary: “Jesus Lived in India“. The Village In Syria Were They Still Speak Jesus’ Tongue; https://www.youtube.com/watch?v=e50qiS-IjJM.

Swami Rama found Jesuit Sadhu in meditation. In India Christians practise meditation, but in the West there is no practicality in Christianity. This Sadhu believed firmly that Jesus had lived in Himalayas. Swami Rama met also a pandit who claimed that Jesus lived in Kashmir from 13 years old until he was 30. He told that Jesus wore a traditional Kashmiri garb, his hair style was also Kashmiri, and the miracles that he performed are well known yogic miracles. There is a mount where Jesus lived practising meditation. Most of the people in the area believed it to be true.

Swami Rama came to know Sadhu Sundar Singh, who saw repeatedly dreams about a man calling him to go to Himalayas. Finally he saw a picture of Jesus and was convinced that he was the one who appeared in his dreams. Finally he moved to Himalayas practising meditation. He was teaching; ‘Krishna, Buddha and Jesus were representatives of one absolute reality, who assumes various forms and descends to guide humanity whenever it is needed.’ One day this great sage just vanished for ever.

In 1947 Swami Rama met Garwali Sadhu, lovable Cristian mystic. He had found similarities of the Sermon on the Mount and the Book of Revelations to the yoga system of Patanjali. He told that when religious teachers could not impart practical knowledge to their students, this corrupted the religions of the world. He would say; ’I love Christianity but not Churchianity’. He felt the Christ is universal consciousness. In that place Swami Rama got arrested for no reason and asked mentally for help. That night he had a clear vision of Jesus, who grasped his arm and said; ‘Do not worry nothing bad will happen to you.’ Swami Rama was released soon in the court.

Two Jewish rabbis of Indian origin were confirming, that Samkya philosophy, Hinduism and Kabbalah seem to have the same source. Swami Rama concludes; Diverse are the ways of enlightenment, but the goal is one and the same for all religions. Yogis could voluntarily cast of their body and even enter into another body if it was available. (Was that the way Jesus survived the crucifixion?) Source Living with the Himalayan Masters.

WHAT SAY THE PSYCHICS AND REMOTE VIEWERS

Courtney Brown and his remote viewers about non-crucifixion of Jesus Christ; Jesus knew what suppose to happen to him (crucifixion), his disciples felt the old Jewish prophecy needed to be fulfilled, but without Jesus. An insane man chosen to represent Jesus was drugged into believing he was Jesus. Peter was not told the truth, that’s why he denied 3 times the man being Christ. Judas was arranging the crucifixion. Later Judas was imprisoned, when the truth started coming out. https://www.youtube.com/watch?v=P7G_ZnuV88s.

Pamela Aralyn is channelling often Jesus; Yeshua was born ordinary way. When he was crucified, he had already left his body. He went to India for self discovery. He got married with Mary Magdalene. His message; ‘violence in the world is created by collective thoughts of all people. You can stop suffering by elevating your mind higher’. More https://www.youtube.com/watch?v=pLHt-IzNZDs.

Channeling Jesus by Tina Louise Spalding; ‘My purpose is now to undo the mistakes in Bible. Stories were added so that others would join Christian movement. I had intense connection to spiritual, teachers, gurus. I went to long journey to east to learn alternative methods. I married Mary Magdalene. We had children. Death is not final; https://www.youtube.com/watch?v=NpzQz4eGihY. Mostly what Jesus/Yeshya says in psychic messages is inspiring, positive and caring; ‘There are many paths to God. I am not the only way. You are all Gods. I’m here to help. Religions have betrayed me. I was not crucified.’

Channeling Erik; Mary was raped and Jesus was born. Jesus did not die on the cross. He had practiced what Tibetan monks do; to appear unconscious with slow respiration and hearth beat. He traveled to several countries. He lived the rest his life in France mainly, had five kids. He is currently reincarnated in India, a woman M-o-n-a. May 21, 2016; https://www.youtube.com/watch?v=cDabM4X5cCw. Channeler Ivan Teller mentioned also Jesus lived in France.

Sarah claims she is a direct descendant of Mary Magdalene and Jesus who lived in France. http://www.dailymail.co.uk/femail/article-398346/Im-descendant-Jesus-Christ.html#ixzz49gQpeXGS. Book ‘The Lost Gospel’ claims Mary Magdalene was original Virgin Mary, based on manuscript found in British Library dating back 1,450 years. http://www.dailymail.co.uk/news/article-2827310/Jesus-married-prostitute-Mary-Magdalene-two-children-lost-gospel-reveals.html

Didi Annapurna, Thanks for reading, if you post this article you may link it here
http://beforeitsnews.com/spirit/2016/05/jesus-and-israel-never-die-2502435.html

God is One, Names are Many, Whom to follow?
No One World Religion – but Global Spiritual Awakening