Venezuela is a Blessed Country

You have heard the main stream media news, so I don’t repeat them here, this is about what the alternative sources, activists and Indian Guru says regarding the situation in Venezuela. Maduro is not yet yogi, but...

Maduro himself told in 2012 that he was a follower of Indian guru Sathya Sai Baba. First Sai Baba center in Venezuela was opened in 1974. Maduro visited Sai Baba in India in 2005.

On June 1, 2003, Dada Maheshvarananda was invited to meet Venezuelan President Chavez on national television. He presented a copy of his Prout book to President Chavez and mentioned what Sarkar had said while visiting Venezuela in 1979; "Venezuela needs good spiritual political leaders. If Venezuela can produce spiritual political leaders, it will not only be the leader of Latin America, it will also be the leader of the planet. Venezuela is a blessed country."

D Maheshvarananda also briefly explained to Chavez that Prout is based on cooperatives, regional self-reliance, ethics and universal spiritual values. President Hugo Chavez said, “Dada Maheshvarananda has given us a book that we appreciate very much. Your visit has come at such an opportune moment”. Sarkar has also said; “Prout will be accepted like hotcakes in Latin America.” 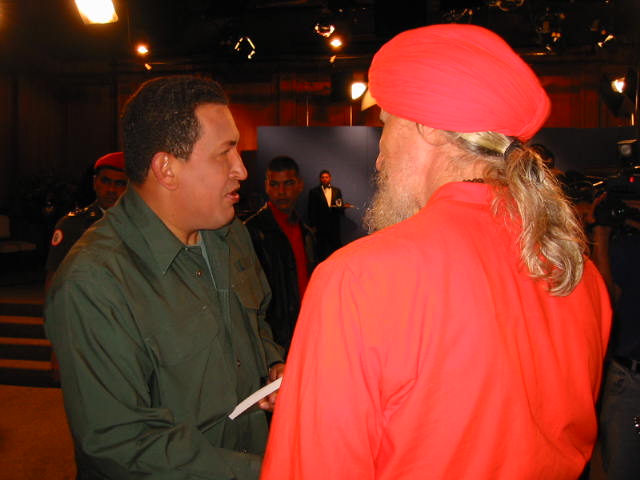 Sarkar speech in Caracas in 1979 (edited)

Some say that after thousands of years, beings from other planets may come and see human beings become extinct due to their internal disunity and infighting. Do you want history to be written like this? Then preach the gospels of humanity everywhere – save the dying humanity.

Until fifty-one percent of the population adheres strictly to the principles of morality, there is no chance of a successful democracy. True leaders should always think how to work best for the human society, that people are not led to darkness, death and immorality.

Sarkar in Kalkata 5th April 1989; In South America all the countries are poor. Venezuela, unless it makes more effort to become self-sufficient, will face economic difficulty when its petrol runs out, 5 April 1989

Max Blumenthal and Ben Norton speak with Aline Piva, journalist who teaches in Caracas University, Venezuela. She says the situation in Venezuela regarding poverty and opposition was much worse in 2013 and 2016 due to US sanctions, now the situation is better, although people have still hardships in daily life.

When US has not been able to do internal coup, they are now planning military action from outside. US PM Bolton showed his threatening plan of sending 5000 troops to Venezuela. May be the timing was now good for US and allies to try to intervene, due to right wing new president in Brasil.

Psychological war inside Venezuela has been going on for decades, but the opposition has not got enough support, so they are now trying to get external help. Ridiculously, 80 % of the Venezuelans had not even heard about Guaido before the coup attempt. Foreign countries leaders didn’t know his name, or how to pronounce it, US Pompeo as example.

Last elections were held in May instead of December due to opposition asking early elections, but then they themselves boycotted it, because they knew they can’t win the election, so they try now coup attack with external help. Maduro asked even UN observers to attend that election, but UN didn’t want to send.

Because US creates artificial economic crises in Venezuela, it is difficult to solve them, but Venezuela has managed quite well. In year 2017 alone the money frozen by US and its allies was ab 6 % of the total GDP of the Venezuela. Besides Venezuela paid a lot of money while selling oil in US dollars. US is now offering Quaido the Venezuelan oil assets in US. The UK government refuses to give Venezuela its 1.6 billion of gold.

Seems US can’t win the battle, 80 % Venezuelans oppose the external intervention. Maduro is moving to sell its oil to other countries than US in other currencies. Solution would be to let Venezuela solve the problems internally, to have dialogue between the government and opposition. That is also what Maduro is asking for. Maduro’s voicemail to Guaido, offering dialogue, https://www.youtube.com/watch?v=9V9HF1p2leA

Regime Change For Profit: Chevron On US Venezuela Coup

Media shows only one side of the situation in Venezuela. Claims of Russia meddling in US, now US meddling in Venezuela. Chavez distributed the wealth to the poor, although may be his policies were not the best, (but his heart was for Venezuelan people, DA). The capitalist elites got pissed off. When there is coup it is always about oil (or money). Quaido’s first promise is to privatize the oil, and Chevron, Halliburton etc cheer up for oil and jobs. They did it in Irak, Afghanistan, Ukraine, Libya etc. Is something better for common people now in those countries?

US policy: no votes, no democracy, Quaido president! US allies don’t care about people of Venezuela. They don’t even show in MSM that UN and EU parliament are not going to support the coup. Italy stood up brightly. Some other EU countries didn’t also recognize Quiado, even under pressure. Russia, China, Mexico, Turkey don’t support Quaido’s presidency. Venezuelan military is on the side of Maduro. US has no right to intervene other countries. They are really bad at that. https://www.youtube.com/watch?v=II6XA6BAyjA

Putin Warns US: Hands Off Venezuela. President Putin denouncing the US interference as “a gross violation of the fundamental norms of international law.” https://www.youtube.com/watch?v=HNsgpRcgyY8.

A bit about Maduro. His family was Catholic, and his ancestry Sephardic Jewish. Before Maduro became a politician, he was a bus driver in Caracas. In 2013. Maduro was elected President, narrowly defeating Henrique Capriles. In 10 January 2019 Maduro was re-inaugurated after winning May 2018 elections. Maduro is married with Cilia Flores, a lawyer and politician.

US has promised Venezuela 20 million dollar aid, Canada 40 million ja EU 7,5 million. Madhuro is blocking the aid on the boarder, because is afraid of letting US attackers in. Aid talks are just political show according him. There are thousands of allegations against Maduro, but as well he has received many awards, so naturally he is a controversial person.

‘Is Venezuela your state?’ Turkish Erdogan slams US & EU, https://www.youtube.com/watch?v=o3kQIGBNU7k

Maduro asks the world to stop US madness – them trying to get hold on Venezuelan, gold, oil, diamonds, https://www.youtube.com/watch?v=LaugArT_Z8A

Which countries resisted US on Venezuela?, https://www.youtube.com/watch?v=eOrCTscBaK0

Curcio, a Professor in universities in Caracas, explains the inflation, caused by US etc countries, http://axisoflogic.com/artman/publish/Article_82240.shtml

Didi Annapurna, spread the world, link it here, thanks!

Chavez and Latin America
Why Yogis Should Run the World?
Ananda Marga Meditation, the Best!
Barter Trade is Common in Other Planets
Lähettänyt Prout Scandinavia