Swastika is a part of Ananda Marga symbol, the pratik, given by Spiritual leader Shrii Shrii Anandamurti in 1979. He explained that one triangle forming part of the so called david’s star means meditation, and the other triangle means action. So when we have proper knowledge gained by meditation, we can do beneficial actions, service, which leads us to permanent spiritual victory, or spiritual progress, which is described by the sign of swastika. Besides there is still the rising sun, golden dawn. 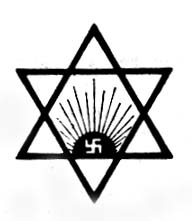 This symbol usually wakes up a lot of curiosity and even fear among common people coming in contact with it. However swastika has been used by almost all the world religions and tribes in the past thousands of years, Jewish, Christians, Jains, Native Americans, Same people of Lapland, Arabs, Indian Buddhists and Hindus, Orthodoxs, Celts, Vikings, Samurais, Romans, Zarathustrians, etc. It was used commonly by governments and all kinds of organizations.

This shows also that all the nations of the earth have had connection with each other already long time in the past. For example native Indians had swastika before Columbus conquered America. Only after Hitler was using it in improper way, it has become almost non existent. Hitler took swastika symbol from Aryan tribe of India, which had used it thousand years BC already. Nowadays its use is not allowed in many European countries.

In Finland swastika is still in use by army air force, and even in right position, https://seura.fi/wp-content/uploads/2018/09/lentosotakoulu_svs-630x400.jpg. (https://en.wikipedia.org/wiki/File:Lentosotakoulun_lippu.svg)
President’s official flag also has it, although modified, https://fi.wikipedia.org/wiki/Hakaristi#/media/File:Flag_of_the_President_of_Finland.svg 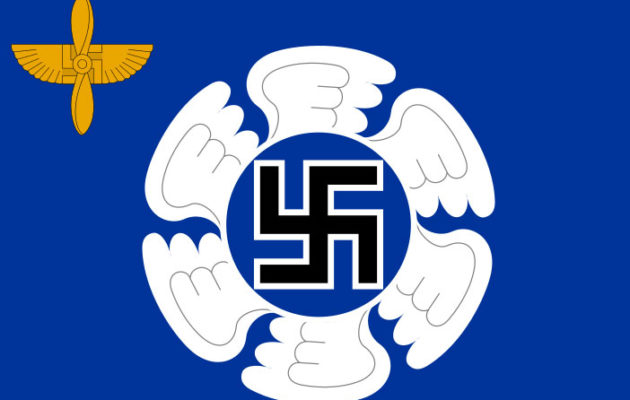 Finnish professor of world politics, Teivo Teivainen says that he is not wanting removal of traditional swastikas in Finland. “I don’t support German type of swastika embargo, and that the traditional Lotta Svärd materials should be destroyed by the ideological sanitation service. They are part of Finnish history and thus worth to be preserved”

Swastika have thousands of years history and has been used as a powerful spiritual symbol across many cultures and continents. For the Hindus and Buddhists in India and other Asian countries, it was, and still is, an important symbol even today, and can be seen in abundance on temples, books, buses etc.

Shrii Shrii Anandamurti has also said that any symbol can have positive and negative, meaning it depends on how it is formed. Nazi swastika is tilted and sometimes reversed, combined with the red background, having negative feeling. Neo-nazies are also using it sometimes. Neo-Nazi demonstration in Finland one month ago, police took away the Nazi flags, https://www.youtube.com/watch?v=yd3kTEJqlBw

Didi Annapurna, if you post my article link it here, thanks!