There has been some controversy how Stalin died. The news of Stalin's death spread on 5th of March 1953. But according to final official release on 2013, an autopsy confirmed that the Soviet leader died after having a stroke at 6.30 pm on March 1, 1953 and the reason for his death was a celebral stroke caused by high blood pressure with stomach bleeding. Previously the official time of death has been given 5 th March 1953. http://www.dailymail.co.uk/news/article-2292123/Stalin-died-natural-causes-Autopsy-published-time-says-Soviet-leader-suffocated-suffering-stroke.html#ixzz45VNjWPUU 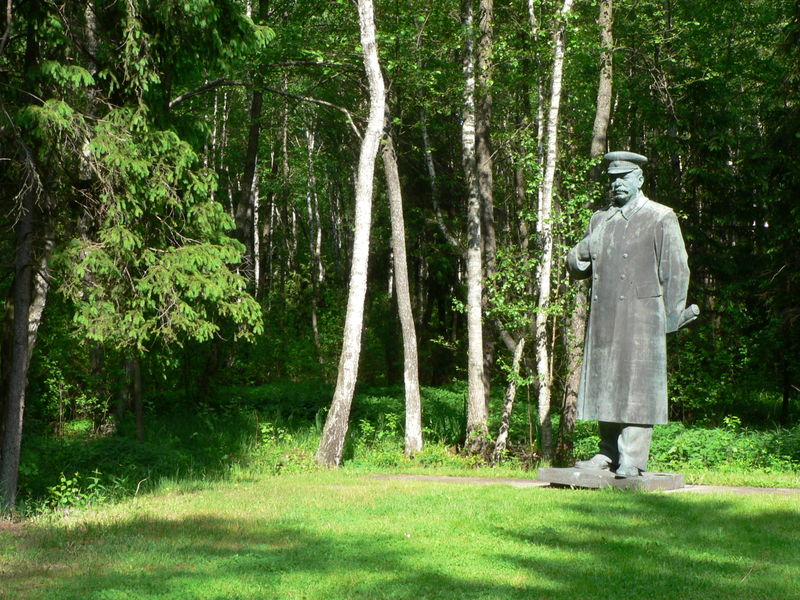 Indian scientist and spiritual leader Sarkar had mysterious abilities. He used to hold remote-viewing sessions by providing his disciples with ability to focus on present, past or future lives of people. Sarkar demonstrated also in many different remote viewing occasions how, indeed, Stalin died naturally by “Cosmic Scissor”.

According D Savitananda, Sarkar asked one brother to meditate and then remote view Stalin and his military officials in Kremlin. They made a world military map, plan for taking over the world. There was time table of attacking by nuclear weapons all major cities in Europe, US and India within 29 minutes. Then plan was to take over control of the world and make all communists. Before the plan was signed by Stalin they had some hours pause, and Stalin went into his room.

Now Sarkar ordered the brother to go into Stalin’s room. Stalin was sitting and thinking; ‘Alexander the Great failed to conquer the world, also Hitler failed, but Stalin the great is going to do it, and become the first world dictator’. Sarkar said; ‘You see, just for lust of power he wants to destroy the world’. Sarkar said to the brother; ‘Ok, return now, let the nature take its course.’

After one week the news came that Stalin had died, but Sarkar said that actually Stalin died a week ago while sitting in his chair. Stalin never came to sign the final order for the attack. The officials were waiting for hours and then broke the door and found him dead. They didn’t announce his death before they elected his follower, who was afraid to act according the plan to attack the world. .................

BBC published a documentary in 2012 about mysteries surroundings of the death of Stalin and concluded; all the people who surrounded Stalin, understood that Stalin wanted war - World War III. Stalin had said: 'We have the opportunity to create a communist Europe.' But Beria, Khrushchev, Malenkov etc understood it was not wise to begin a war against America too. Long, BBC video; https://www.youtube.com/watch?v=pRlOt-wqFHY&nohtml5=False                ................................

Afterwards Sarkar showed to Dasharat the actual scene before Stalin died. Stalin was holding a conference with his army officers. Sarkar then asked Dasharat to see what was in his pocket when he died. Dasharat said that there was a paper with something written in Russian. Sarkar said that in that paper was written a dangerous order, but Stalin died before he could give that order.

According one source: It was the first week of Febr, 1953 in the evening after sunset, Sarkar was sitting on the tiger's grave in Jamalpur. Along with Him was Sadan Dev, who worked in railway workshop, and Dr. Sachinandan Mandal (Sarkar's classmate).

Sarkar was silent and looking at the sky. Suddenly He told Sadan Dev to close his eyes. Sarkar then ordered his mind to go to Moscow and see what Stalin was doing in Kremlin. Sadan Dev said that Stalin was sitting alone and was brooding about something. Sarkar then asked him to enter inside Stalin's mind and see what he was thinking. Sadan Dev said that Stalin was planning to spread communism in different parts of the world. He was also planning to attack neighboring countries, including India. Now Stalin's thinking was that if India, which was the second most populous nation, was taken over by the communists, then he would be able to exert his influence in nearly all parts of Asia.

Then Sarkar told Sadan Dev to warn Stalin that it was not within his power to do this, and that if he tried to do this, it would only bring him disaster, and hence he should desist from any such attempt. Sadan Dev replied that he warned Stalin accordingly. After Sadan Dev gave Stalin the warning, Sarkar asked him to bring his mind back. He did not say anything more about Stalin that day.

The next is given three weeks after previous. Again Sarkar was sitting on the tiger's grave in Jamalpur. This time Haraprasad Haldar was with Him. Sarkar asked a passing man in Army uniform to sit near and used him as a medium to see what was happening in the Kremlin. He said that Stalin was having a conference with his Army Generals, and he was explaining something to them while pointing at a map. Sarkar asked him to enter inside Stalin's mind and see what his plans were. He said that Stalin was planning to invade the neighboring countries, including India, with a view to spreading communism all over the world.

Sarkar asked him to warn Stalin to desist from this action forthwith, as otherwise it would be disastrous for him. The man said that he had warned Stalin, and that it had created some fear in his mind. Stalin left the conference and went to his private room. Sarkar then continued discussing something else with Hara. Nearly half an hour had passed, Sarkar stopped the discussion and suddenly asked the medium to see what Stalin was doing now. He replied that Stalin had overcome his momentary fear and was preparing to give the final order to his army. Sarkar became very serious and said that he had not learnt any lesson and that his time had come. A few days later Hara was returning home. He found that some people had gathered around a sweet shop and were listening to the radio. Someone then told him that Stalin has died. Hara was stunned by this news.

On 14th Nov 1954 at the Jagriti in Rampur colony Sarkar was giving demonstration and asked one person to read the mind of Russian President Malenkov, who was also planning ways to bring India under communist rule. Sarkar asked him to warn Malenkov to stop any such thought, and to say that Stalin met an untimely death while persisting in that pursuit.

Ac. Haragovinda Mandal of Jamalpur, One day during a field walk, Sarkar said to him that Stalin was a 'Mahapataki' (great sinner). He was preaching peace and justice in the name of communism, but was planning just the opposite, i.e., to bring unbounded human destruction through serial war...

Later, in Jamalpur during one general darshan, Sarkar showed to Dasharat the actual scene before Stalin died. Dasharat saw that Stalin was holding a conference of his army officers. Sarkar then asked Dasharat to see what was in the pocket of Stalin when he died. Dasharat said that there was a paper with something written in Russian, which he could not read. Sarkar said that on that paper was written a dangerous order, but Stalin died before he could give that order.

Many years later, in 1970, Bhaktavatsalamji attended field walk in Ranchi. Sarkar suddenly stopped and turned to him, and asked, "Bhaktavatsalam, do you know how Stalin died?" Then He went on to explain, "One evening I was sitting in the Jamalpur tiger's grave. Then a 'little boy' from the Himalayas sent me a telepathic message. The message was: 'Sarkar, Stalin is planning to attack India. Save India from this monster!' Then a warning was given to Stalin. Again, three weeks later I was sitting in the tiger's grave. Again the 'little boy' send a telepathic message from the Himalayas saying that Stalin was preparing to attack India. He pleaded with Me to save India. Do you know, Bhaktavatsalam, what happened then? Stalin was dead soon afterwords. But the Russians kept his death a secret. There was a power struggle between Beria and Khrushchev. Only a few days afterwords, when that power struggle had ended, when it had been decided who would succeed Stalin, was his death announced.

In that same year there was another demonstration given by Sarkar in the Ranchi Jagriti. He was explaining that it is Paramapurusa who has given various powers to human beings, and without His wish humans cannot perform even a most normal function. He then asked Dada Vinayananda to deliver speech. While speaking, suddenly Dada's voice ceased. Sarkar smiled and said that that He had withdrawn Dada's power to speak. He gave then him back the power to speak and said: "The power with which the speaking ability of Vinayanandaji was ceased is the Cosmic Scissor. By using that, Paramapurusa can stop the function of anything in this universe. He paused for a while and then said, "At the time of Stalin's death, this Cosmic Scissor - the vein carrying the blood supply to his brain - was cut off, and he died immediately." After saying this, Sarkar left the room.

The persons present at these demonstration were unaware of the information given by others, but Hara had before his death narrated his experience to several others.

...........................
Communist leader Jyoti Basu was very ininfluential person in West Bengal, where 1967 Communists brutally murdered five of our yogic Monks. The tribals continued to advance towards Sarkar's quarter. Sarkar stepped out and began observing the advancing mob. And then in a flash, that mob run away, as if frightened out of their wits by some mysterious force. This was thirty-six years ago, on death anniversary of Russian leader and dictator Joseph Stalin.

Sarkar mentions in his books: Stalin was a demon who killed millions of people. This all occurred because of the inherent defects of Marxism. Marxists built castles in the air... They killed many innocent people and sent countless others to concentration camps in the name of so-called ideology... In the name of doing good for the masses he (Stalin) killed so many people.

According Sarkar, the final and most dangerous form of economic exploitation is fascist exploitation... The British imperialists, in order to legitimize their exploitation, embraced nationalist theory. Mussolini of Italy and Hitler of Germany moved along the same path. When communist imperialism was established after the Second World War, the Soviet leader Joseph Stalin propagated the concept of the Slavic supremacy. Likewise, the Chinese leader Mao Zedong built up Chinese superiority.

Sarkar founded Prout theory, which blames communism about its inhuman suppression of spirituality and its dictatorial authorities fooling the people. Sarkar also predicted how communism will die in Russia and in the other countries. Indian government jailed Sarkar in 1971 with false charges, possibly by the demand of Russian intelligence, due to fear that Prout would replace communism. Seven years later Sarkar was found innocent by courts.

Stalin’s rule – his forced industrialization, his famine causing collectivization, his paranoid purges – killed, according to many estimates, between ten and twenty million people. More; www.osa.ceu.hu/gulag/.

True evil occurred under Stalin’s lead. Many of the things that were later pinned on Hitler were things committed by Stalin and the communist regime. Many of the photographed work and death camps were really led by the Russians, and not Germany. http://psychicfocus.blogspot.com/2015/02/stalin.html

Many Russians admire Stalin, even Putin defended him in May 2015: http://www.dailymail.co.uk…-just-man-good-intentions.html#ixzz45StZVYEa